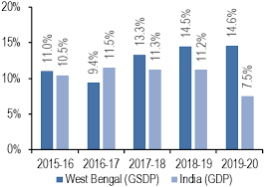 One of the issues related to the state’s crumbling economy is the West Bengal assembly elections.

The reasons for this are corruption, stalled industrialization, weak credit growth, lack of new jobs, lack of infrastructure development and spending on agriculture.

In these two years, while the bank deposits across the country saw an increase of 19.8 percent, it was only 14.1% in West Bengal.

Unemployment is also an important issue in the largest state by fourth in terms of population. The Centre for Monitoring Indian Economy (CMIE) data for February 2021 show that the unemployment rate in West Bengal was 6.2 percent, which was lower than the national figure of 6.9%. However, the state ranked 17th among 27 states.

Daily wages and per capita income in the state are also low. While every laborer at the national level receives Rs 294 a day for the non-agricultural sector for FY 2020, a Care Ratings report shows that the wage rate in West Bengal was almost 8.5% lower than this figure. Even in terms of per capita income, West Bengal’s figure of Rs 1.16 lakh was 16% lower than the national average.

According to an analysis of 13.47 lakh enterprises completing the MSME enterprise registration process, West Bengal does not appear anywhere in the list of top 10 states. West Bengal had only 27,776 MSMEs registered and employed an average of 5.84 persons.

Although official figures show that the state spending on education and rural-urban development areas is above the national average in 2019-20 but lags behind in the road, health and agriculture sectors. There has been a steady increase in spending on education, health, sports, arts and culture, housing, water supply, labor welfare and more.

-According to PRS Legislative Research and West Bengal budget documents, the state spending on roads and bridges for 2019-20 is far behind the average of 4.2 percent of the rest of the states.

-Along with this, the state government has been accused that central schemes have not been implemented, including PM Swanidhi Yojana, Ayushman Bharat and PM Kisan Samman Nidhi Yojana.